In 2009 I wrote an article for Inside Jersey magazine about my great-grandfather, who had been a Texas Ranger. That article is the property of The Star-Ledger newspaper and parent company Advance Publications, and since I didn’t want to seek their permission to republish, I thought I’d just update the original. After all, five years is a long time and a lot can happen, even when you’re dead.

My great-grandfather had been dead 80 years before I finally met him in a restaurant 1,800 miles from his burial place.

I was chewing a bite of grilled salmon in a Longhorn Steakhouse in northern New Jersey when I looked past my wife’s shoulder and locked eyes with him. I rose from my seat and walked across the room to the poster-sized photograph hanging on the wall.

When the waitress asked if she could help me, I pointed at the photo and blurted, “That’s my great-grandfather!” Whether or not she believed me, at least she acted surprised. Her reaction — feigned or genuine — couldn’t have been stronger than my own. Of course I’d seen the photograph before or I wouldn’t have recognized it. A smaller copy came into my sister’s hands when she inherited a box of keepsakes when our mother died.

Growing up together, my sister and I didn’t know much about Louis Pauli besides the name. No photographs of him were kept in places of honor in our house or our grandparents’ house. No one talked about him, and to be fair, I can’t remember that we asked many questions.

All we knew of Louis Pauli was his small gray marker at San Jose Burial Park on San Antonio’s south side. My grandparents were “cemetery people,” and my sister and I went with them frequently as they tended our relatives’ resting places.

Great-Grandfather Louis Pauli’s plain headstone didn’t interest us as much as a nearby marker with a perching dove. While our grandparents worked with rakes and hoes a few feet away, Susan and I would run around plucking cedar berries from surrounding trees before depositing them under the concrete dove’s beak in case she got hungry in the night.

Soon, Nana and Pawpaw would pack their gardening tools and we’d leave Louis Pauli alone, perhaps waiting to see if the dove would eat the offerings left by his great-grandchildren.

I grew up, got married, had children of my own, and eventually moved to New Jersey. I can honestly say that I never spared a thought for Great-Grandfather Louis Pauli until I saw him hanging on the restaurant wall, where he’d become nothing more than cheap ambiance for northerners who wanted to feel like they were eating ‘round the campfire on the old frontier.

But Louis Pauli was more than cheap ambiance, much more.

In researching my article for Inside Jersey magazine, more photographs came tumbling out of the keepsake box, and something more besides — my great-grandfather’s suicide note.

You see, those New Jersey diners probably never thought the men in the photograph were anything more than caricatures of a romanticized period in American history. But in fact those men lived real lives, though my great-grandfather ended his with a well-placed bullet to the head.

Louis Pauli had given up being a Texas Ranger and worked most of his life as a butcher at Mission Provision Co. in San Antonio. One Sunday morning he told his wife that he was taking his pistol down to the meatpacking plant to shoot rats. If that thought horrifies you — as it does me — then together we shall hope that conditions at meatpacking plants have improved since 1929. 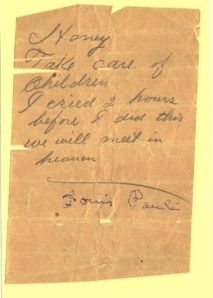 In his note, my great-grandfather tells what happened next:

Honey, Take care of children.
I cried 2 hours before I did this.
We will meet in heaven.

A yellowed newspaper clipping picks up the story, though I note that even then newspapers were having trouble reporting basic facts, like the spelling of a man’s name, or a caliber of pistol that I can find no evidence ever existed:

L.A. Paulia (sic) 55, of 200 Lamar Street, employe (sic) of the Mission Provision Company, was found dead on the floor of a sausage storeroom of the factory, 111 Blue Star, at 10:30 o’clock Sunday morning, shot to death.
A.J. Mays, 481 Lovers Lane, a fellow employe, first to reach the man when a shot was heard, found Paulia dead with a bullet hole in his head above the right ear. Near the man’s hand was an .82 caliber pistol and by his body was a note to his wife.

Last week in New Jersey, I stood at another man’s grave and thought about choices. My choice that day was to visit a cemetery in beautiful weather instead of doing so the previous day, which had been rainy and cold. It was an insignificant choice compared to the one my great-grandfather made on that Sunday morning so long ago, but the point is that the living should cherish every choice, because once you’re dead, all opportunity for making choices — even difficult ones — is forever gone. 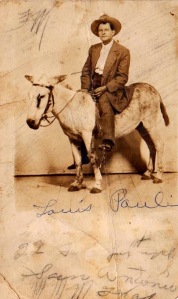 Shortly after my original article was published in 2009, I left a copy of the magazine for the manager of my local Longhorn Steakhouse, along with my contact information. I never heard back.

I also contacted the corporate offices of Darden Restaurants, thinking my article might be of interest to them. It wasn’t.

During a subsequent visit to the restaurant, I saw that the interior had been redecorated. Gone was the photograph of my great-grandfather, likely taken down and thrown into a dumpster. It made me sad.

Last year I was contacted by Christopher Lancaster, a Texas historian who had read an abbreviated online version of my original article. He sought my permission to use a reproduction of that article in a display honoring Louis Pauli and other old Texas Rangers. Permission was happily granted.

Today near the Alamo in San Antonio, Louis Pauli finally received the respect he deserved for being a member of one of the most storied crime-fighting organizations in our nation’s history. In a sense, he’s still a living part of the Old West, and is being honored as such.

A man who once chased Mexican bandidos and renegade Comanches across Texas, I wonder what he’d think of the great-grandson who now spends too much time chasing gnomes across New Jersey.

I also wonder why photos of my great-grandfather were hidden away by my grandparents and parents. Why was he never discussed?

Perhaps the memories were too fresh, too painful for those who actually knew him. Maybe they were ashamed of his actions, or maybe it was part of some bigger family scandal that was better left buried with him.

But times change, and this morning, my sister attended a Founders Day event in San Antonio. She sent me these photographs. 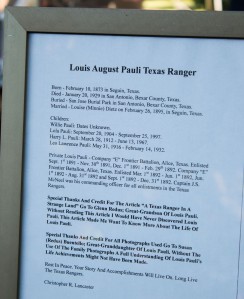 We will never know why Louis Pauli did what he did, but it no longer matters.

Today, my sister and I are proud of that man whose name was never mentioned. Founders Day visitors who never knew Louis Pauli existed are now honoring him more than his closest relatives ever did.

Louis August Pauli — forever a Texas Ranger and forever our great-grandfather — we love you.