I have the best dentist in the entire galaxy.

She’s kind, gentle, talented, empathetic, all the things you’d want in a good dentist, and so much more!

Of course she hasn’t actually worked on me yet — she’s new — but I know all these things to be true, and I’m going to keep saying them because, you see, it’s possible that she’ll read this, and I’m going to have to go back to see her next week.

I can’t afford to get on her bad side, at least not yet.

I used to not like going to the dentist, but I love to go now, and that’s why I was really looking forward to my visit today for my regular cleaning and check-up.

I’ll admit that it took me awhile to get over my initial dislike of all dentists. I had some bad experiences when I was a child — something about an abscess — and I ended up puking all over the back seat of my mother’s Oldsmobile. 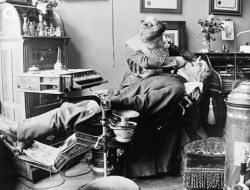 A few years later, I witnessed my father getting worked over by a pissed-off dentist who’d been called in to perform an emergency extraction on Thanksgiving Day back in the early 1970s. I’d driven my dad to the dentist’s office, then crept down the hallway after hearing some strange noises, and that’s when I  saw the dentist with his knee in my dad’s chest as he yanked on his tooth with a pair of pliers.

After all that, I thought I’d be scarred for life. But that was before the friendly folks at Stanhope Family Dentistry showed me that scraping, drilling and filling can actually be quite fun!

True, I did experience a temporary relapse after learning that my old dentist — the one who was accustomed to pampering me — had sold her business, packed up and moved to Florida. But I found out today that the new dentist has kept most of the old staff, and they remembered that I require lots of babying. Seeing Sue’s friendly face when I walked in the door today might have been the only thing that kept my slight case of the jitters from galloping into a full-blown panic.

I tried to hide by sitting in a corner of the waiting room where I could watch the guppies swimming around in their tank. I couldn’t help noticing that there was no escape for them either.

It wasn’t long before Kirsten, the dental hygienist, found me cowering in the corner and gently invited me back to her action chamber.

Even though I’d done this before, Kirsten quickly explained what was about to happen to me, much like flight attendants explain what will happen when your Boeing jetliner starts to go down in flames.

First up would be some x-rays, and Kirsten covered my torso with a lead shield despite the fact that I told her I didn’t want to father any more children. Now most of the modern dental equipment is an improvement over the shop of horrors I experienced as a child, but to my view, the x-ray machine is a step backward.

Instead of painfully jamming a small, hard piece of cardboard into your mouth, nowadays they come at you with this thing that looks like an oversized egg-beater, which they expect you to somehow jam down your throat. Well my mouth ain’t that big, but darned if Kirsten didn’t twist the egg-beater around and get it in there anyway. Soon I was drooling all over the egg-beater while basking in a warm, radioactive glow.

After removing the lead shield, Kirsten fastened the blood bib around my neck, handed me the headphones and let me dial up some classic rock ’n’ roll. This is a definite improvement over anything we had in the olden days, as it really helps to cover the sound of scraping and screaming. Next came the goggles, which would protect my eyes from flying pieces of bone, gum, tongue and last night’s popcorn kernels.

From behind came the sound of a bag ripping open, and Kirsten dumped her tools onto what sounded like a metal tray. That was the one and only mistake she made, because it sounded like that day in 1986 when I knocked over the fireplace tools. I almost jumped up and ran at that point, but it was too late, as Kirsten had recovered quickly and was already leaning in.

“Now you know what to do if you need me to stop?” Kirsten asked.

“No, no screaming, but just raise your hand.”

I raised my right hand and bleated, “You mean like this?”

“No, not that hand or you might hit my arm while I’m holding a sharp tool, and we don’t want that! Use your left hand!”

Man, that sounded like great advice, so I sat on my right hand and gave my left a practice wave.

Kirsten came in fast with a mirror and what looked like a couple of crowbars. About the same time, I swear to god, Ann Wilson from the band Heart started singing “Heartless” over my headphones. Just one of those crazy coincidences, I guess.

What happened next is a bit of a blur, because I think I might have passed out a little. I have vague memories of yakking into a bowl several times, and also staring into a bright light while wondering if it was the same bright light they say you’ll see when you die.

But soon I was being hoisted back up for the final spit, and then the new dentist came in. So kind, so polite, so gentle.

I heard her and Kirsten conversing behind my back as they examined my x-rays. Now I’m pretty deaf, so I didn’t catch all of what was said, but I think I heard a few whispers:

“Not since I left West Virginia!”

Well, anyway, I was straining to hear, and whatever it was I heard, it was enough to know I was screwed.

Turns out those damned x-rays had spotted a cavity, but not just any cavity. It’s a cavity that’s under a crown that I had put on back when I still had a real job. Now that crown’s gotta come off so they can fix the garbage that’s underneath. Then they’re going to order a new crown, put it on and I’ll be good to go.

And all this is going to happen next week!

Sounds painful, but I’m not worried, not one bit. That’s because I have the best dentist in the galaxy. So kind, talented, gentle and empathetic. No, I’m not worried at all! In fact, I’m looking forward to it!