After my last report, I know  a few of you are awaiting the results from my encounter with a six-year-old preackaged pasta meal, and while we probably won’t know anything definitively until this stuff percolates inside my gizzard for a few hours, it tastes delizioso!

Maybe you thought it unwise of me to even undertake this endeavor, but hey, I’m not STUPID! Of course I gave this stuff a visual inspection before eating it, and that’s why I had to alter the recipe slightly by leaving a couple of things out.

First, you should know that the chicken was not included in this kit, which was a good thing. I used a chicken breast from my freezer that had only been chilling for a few months, and was thus a real spring chicken when compared to the rest of the ingredients.

Next, I inspected the top of the box. Note the wording on the label: 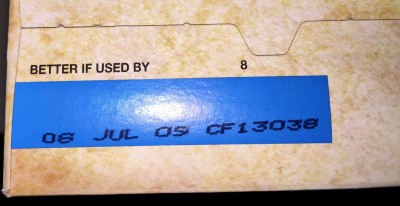 Once I saw that the wording said “better by” instead of “call Hazmat if,” I knew everything would probably be okay.

While cooking my chicken according to the package directions, I opened the kit and inspected the contents. There were no suspicious bulges, or anything oozing from the packages, so I took that as a good sign:

My water was boiling by now, and since the pasta looked fine, in it went. By now my chicken was clucking, and the instructions said to add 3/4 cup of milk and the seasoning pack.

The seasoning pack felt hard and lumpy, which was not a surprise. I easily broke it up with my fingers before tearing open the package and giving it a snort. It smelled a little like an antique shop that at some point had a leaky roof, but I detected no hint of spoilage. I mean, it’s a packet of seasoning, what could go wrong?

I added the milk and the seasoning to my chicken, and the kitchen filled with a scent that was probably not unlike sniffing a handful of dust bunnies from under the guest bed in King Tut’s tomb.

After cooking for a few minutes, I was ready to add the sun-dried tomatoes. I cut open the cellophane package and gave ’em a look, and it was a no-go. I mean, they probably would have been okay, but a few of the tomato dices had wispy hairs, like the prepubescent whiskers of a 12-year-old boy. Since the hairs were so fine, they didn’t show up on a photograph, so you’ll just have to take my word for it. I trashed ’em.

Next was the “creamy sauce.” I snipped open the foil package and started squeezing it into a bowl for a visual inspection. Oh hep me, Jesus!

The creamy sauce came out looking like an unholy cross between peanut butter and baby shit, and I decided that my simmering chicken would not benefit from its inclusion. I suppressed a gag reflex as I squeezed it down the sink under a stream of hot water, which released its full aroma into my kitchen, but thankfully not into my food.

The pasta was done, so I drained it and stirred it into the chicken slop, along with the perfectly aged Parmesan and Romano cheeses. And voila, dinner is served:

Honestly, folks, it didn’t taste too bad, and I was left to imagine just how good it would have been if it had all the ingredients, and if I’d eaten it six years ago.