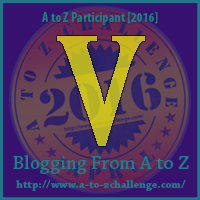 EDITOR’S NOTE: Welcome to the A to Z Challenge, an exercise in self-flagellation we bloggers inflict upon ourselves to teach us discipline as writers and to build audience. During the month of April, I’ll be posting 26 times, once for every letter in the alphabet. Looking on the bright side, we can each be thankful this is an English language exercise and not Khmer, the language of Cambodia, which sets the world record with a 74-character alphabet! After some misgivings, I’ve decided to proceed with my initial idea of blogging about the special people in my life whose names begin with the appropriate letter. There will be difficulties, like having more than one special person whose names begin with the same letter, forcing me to choose. And then there are those letters — O, Q and X among them — where no name springs readily to mind. What will I do then? We’ll have to wait and see!

V is for Val

With the possible exception of one of my super-talented and devoted readers, Victo Dolore, we’ve all written blog posts that weren’t well-received. For myself, no single post was more disappointing than my first and only attempt at writing a children’s story.

Gnomes and the Shadowy Vale was first published in three chapters on my blog beginning on February 15, 2015, then republished a year later in one big piece, mainly because I couldn’t believe how poor the readership had been the first time around. The equally poor reception of the second edition convinced me!

In the tale we meet Val, who becomes one of the key characters in what is essentially a Valentine’s Day story with a gnomic twist. Today, Val gets a final moment in the spotlight because, in keeping with my theme, I just don’t know many people with V names.

One of the interesting things about blogging is seeing what resonates with readers, and the inescapable conclusion I’ve reached is that many of my more popular posts are the ones that took the least amount of effort. Writing about Val and his short-legged companions took a lot of time, but then so did the longform project that is featured on my alternate blog site, A Year in the Death of One Man, which also didn’t have a lot of readers. I did make a bit of money from that project by selling a synopsis to a print magazine, still, the online reception, as confirmed by WordPress statistics, was less than encouraging.

What it comes down to, I think, is deciding whether you’re writing for yourself or for other people. Despite the overall poor reception for Gnomes and the Shadowy Vale, A Year in the Death of One Man, and some of my other more agonized posts, I don’t think I’d change a thing. While the results were disappointing, I am still pleased by what I produced.

As for Val and his friends, he lives on both on my blog and in a hard-copy version. My wife surprised me by having a few copies printed up, one to keep for myself, and one for each set of grandkids when they get a bit bigger. Maybe one day they’ll read Gnomes and the Shadowy Vale and hate it, too, but owing to family allegiance, they’ll probably be too polite to say!