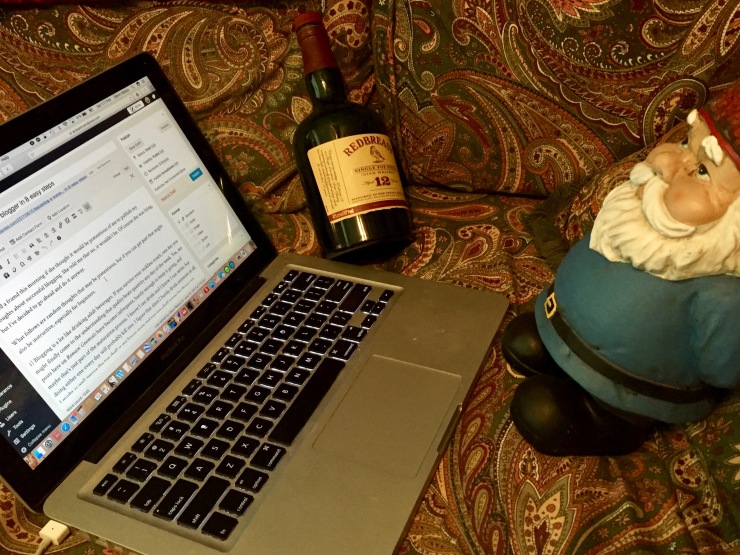 I asked a friend this morning if she thought it would be pretentious of me to publish my thoughts on becoming a successful blogger. She told me that no, it wouldn’t be. Of course she was lying, but I still decided to go ahead with it.

What does “successful” even mean anyway? I guess it means different things to different people, and it’s true, nobody asked me to come up with a list. What follows are random thoughts — a stream of consciousness if you will — that is certainly pretentious, but if you can get past that, might also be instructive for one or two people.

1] Blogging is a lot like imbibing adult beverages. If you survive your reckless youth, one day you might come to the understanding that quality beats quantity any day of the week. Yes, my posts here on Romain’ Gnomials have become infrequent, just like my drinking. In fact, I barely write or drink enough to keep either enterprise going. I suppose it’s all just part of the maturation process. I know I can drink and I know I can write, but doing either one every day will probably kill me. Where drinking is concerned, I figure that since I barely drink at all anymore, I might as well peruse the top shelf at my liquor store and pay top-shelf prices for those rare occasions when I do. And it’s the same with blogging — you don’t have to write every day, but when you do, (unlike this post) pull it from the top shelf.

2] In order to be a good blogger you have to be a good reader. Sometimes it’s tough to come up with a new subject to write about, and we all want our work to be unique. A lot of people think of blogging as that stuff we produce ourselves, but another big part of it is walking through those fertile fields and collecting ideas from other people. Think of it as preparation. No, we’re not stealing other people’s work, but by reading what others write, we’re planting seeds of ideas in our own little garden. Some of those ideas will wither and die, but others will bloom, and still others will be grafted onto existing plants to become some kind of scary hybrid that could one day take over the world! Remember, reading is the key to writing, and if you want to be a good writer, then reading should be your daily discipline.

3] Are you blogging for yourself or for your audience? That question has been asked by a lot of people, and ain’t it just like me to say that ideally, it should be both. But okay, if you insist on holding me to a strict either/or answer, then blog first for yourself. If you’re not pleasing yourself, there’s a good chance you won’t be pleasing others either. I don’t gauge my own success by how many “Likes” I receive, but I’d be lying if I told you it wasn’t a factor. Yes, I write for myself, but if I put a lot of effort into something and nobody cares enough to express a little appreciation, I’ll feel pretty crestfallen. After all, most of us aren’t getting paid for this shit. As a reader, I try not to be too stingy with my Likes. Now maybe what you’ve written isn’t the best thing I’ve ever read, but if I can tell that you’re trying, and if I sense that you’ve got possibilities, then I won’t hesitate to give you a pixel salute, and I hope you won’t hesitate either.

4] We all make mistakes, but if you’re not striving to make your work as close to error-free as possible, then you will never succeed. I write everything off campus, meaning the first draft of everything I write is done in a word processor program that is independent of WordPress. When I’m finished, I’ll cut and paste into WordPress, but that is just to signal my brain that I’m through being a writer and the revision process is about to begin. Once I do that cut and paste, I become an editor, and boy oh boy, does my writing suck! Have you ever noticed that in WordPress, there’s a little counter that keeps track of how many times you’ve revised your work? The counter decides you’re hopeless once it hits 25, and there have been damn few of my posts that haven’t gone beyond the limit before I’m satisfied enough to hit the dreaded blue PUBLISH button. Read, read, read, read your own work until you’re hartily sick of it. Dont submish it to the wrld until your satisfyed that its prefect. Even months later, be prepared for an OMG moment when you find that mistook that was hiding in plain sight. If you feel your hart sink when you find an error in you’re own work, then your well on your way too being a swell blogger.

5] There is a social aspect to blogging that is not present in many other types of writing. I find WordPress to be like other forms of social media, but it’s social media for literate people. Unlike Facebook that depends heavily on clever memes, videos and photographs, or Twitter that restricts you to 140 characters of mostly nonsensical orange blather, WordPress involves a commitment of time, and if I’m going to share my time with you, I’m going to want to know a little something about you. Most WordPress themes come with a secondary ABOUT ME page already installed, and when visiting new blogs, I’m one of those guys who will click on that page Every. Single. Time. Even if your blog has other good writing, I’m much less likely to stick with you if your About Me page says this:

This is an example of an about page. Unlike posts, pages are better suited for more timeless content that you want to be easily accessible, like your About or Contact information. Click the Edit link to make changes to this page or add another page.

Please, please, please put something on your About Me page or get rid of it altogether. If I like your blog, I’m going to want to know a little something about your background, and at least some vague notion of where in the world you live. If you don’t care enough to write something there, at least get rid of the link or my first thought will be that you don’t care enough about details for me to be wasting my time with you. I contend that the best blogging is personal, so try to put a little bit of yourself into everything you write. How else would you know what a nutjob I am?

6] WordPress themes are great, but if people can’t read what you’re writing, please pick a different theme. Remember, black type on a light colored background was good enough for generations. Garish typography is an instant turn-off, especially for a lot of old farts like me. If I have to work hard to even see what you’re trying to write, depend on it that I won’t keep working at it for very long, and neither will anybody else.

7] Be clever with your title, but not too clever. For instance, don’t say your blog is about gnomes when in reality it has very little to do with gnomes. When you try to get too clever like that, people won’t understand and will invariably go away feeling pissed off. What does Romain’ Gnomials even mean anyway? Hell, I’m not even sure that I know. There’s only one person in all the world who truly knows what it means — she’s an Irish nurse I’ve never even met — and she’s not saying! It’s the same sad story with my other blog, The Shinbone Star. What in the hell does that old movie have to do with anything that’s written there? Nobody knows, and I’m telling you, people are pissed!

8] Don’t feel like you have to blog about everything. For instance, if you spend a year visiting a cemetery and decide to write about it, I guarantee you people will NOT understand. They’ll think you are loony-tunes, and they will stay away from your site in droves. Most people think grief is a private thing, so whatever you do, DON’T VISIT A Year in the Death of One Man. Grief is really really private thing for most people, and they’ll think you’re weird if you want to share yours.

Well that’s it. I know 10 bullet points would have been neater and more satisfying, but I could only come up with eight. And about #5, just ignore that, and stay the hell away from my About Me page. It sucks, I know it, and I really don’t want you knowing that much about me anyway, so stay away. I should just get rid of it, seriously, but until I do, I’m telling you … back off!