A year is insignificant when you’re talking about geology, but in the world of blogging, a one-year absence is an eternity.

Never mind that I’ve been busy saving the world on my other venue, regular readers of Roamin’ Gnomials are unceasing in their demands. “When,” they ask, “will you ever again write something as wildly entertaining as the stories about your talking toothbrush, pipe diapers, Spam, or even that shameful trip to the dick doctor?”

Well, this is for you, my friends, readers who couldn’t be bothered with trivial concerns like global warming, racism, treason or misogyny, all of which are discussed with great fervor and flying spittle over on my other site. Just for you, this old blog is ticking back to life, and I guess you might say it’s about time:

Age, retirement and the passing of time can make a guy feel irrelevant, and so it has with me. When a young friend remarked the other day, “Thank God it’s Friday,” I answered, “But every day is Friday for me!” It sounds grand in theory, but in reality, having no responsibilities can have an unsettling “Groundhog Day” sort of feel.

I’ve taken to acting like such an old guy that the young folks will be wagging their heads in sympathy. Even I don’t feel so good about it: “My god, I’m puttering,” I thought to myself the other day, and it’s true!

Sadly, I’m living an analog existence in a digital age. My life is regulated by the ticking of clocks, and those ticks are accompanied by assorted bongs, gongs and cuckoos. There’s the old mantle clock I first wrote about in a post about my Nana, but also the grandmother clock that came to me when my parents died, and a small cuckoo clock given to me more than 40 years ago when my sister returned to the United States from Germany.

Keeping those old clocks synchronized is not only a job, it’s become an obsession. If the mantle clock sounds the hour with 12 ear-splitting gongs, and if the cuckoo clock doesn’t start chirping within 20 seconds from another room, and if the grandmother clock doesn’t then start to chime musically from its position in the basement, I’ll embark upon another fruitless mission to set everything back to rights, all the while knowing that I’ll be doing it all again in an hour or two. I’ve become a slave to my clocks!

And not only must my old clocks keep time with each other, they must also correspond to my one concession to modernity, my iPhone, which I believe must be exactly right down to the nanosecond and in perfect accord with Greenwich Mean Time.

In theory, keeping a set of clocks ticking accurately shouldn’t be such a difficult job despite their lack of batteries, electrical wires or ethereal Bluetooth whiz-bangery. These old timepieces are supposedly kept accurate with tiny adjustments to their pendulums by means of a thumbscrew beneath the bob, or in the case of the cuckoo clock, by a wooden leaf that slides manually higher or lower on the pendulum shaft, altering the center of gravity. Or something.

You’d think that once I got the damned things synchronized all would be right with my world. You’d be wrong. Things can go awry in a heartbeat, or more precisely, between the hours of 2 and 3 p.m., or between the hours of 8 and 8:30 a.m., or literally at any other time of day or night you might wish to name. The befoulment of time seems based on nothing other than the caprice of one or more of the clocks.

With no interference from me, one clock may speed up slightly as the minute hand descends the right side of the clock face, then slow down as it ascends the other side toward the top of the hour — but that only seems to happen on Tuesdays and Thursdays, with the opposite being true every other day of the week.

I’ll be all smiles at 11 a.m. when my clocks go off together in a cacophony of noise, but frowning an hour later when two clocks go off too soon, while the third is late. Off I’ll go on another round of microscopic adjustments to the pendulums, iPhone stopwatch in hand, as if that will make any difference. You might think it’s easy, but it’s not. Was the cuckoo clock early or late? Did I move the pendulum the wrong way last time? Do I turn this damnable screw on the mantle clock to the left to make it go faster, or back to the right to make it go slower?

I’ve asked myself what else could be affecting these clocks. Two use a system of counterweights that in theory should be consistent, while the other relies on winding of the mainspring once a week. Might that clock run infinitesimally slower as the spring unwinds, throwing my careful synchronization into ruin?

It was a nice thought, but experiments don’t prove it out. Maybe I should make a graph and chart my hour-by-hour adjustments to all three clocks.

It’s important that you know I’m not a complete moron. I have a computer. I can Google. That’s how I discovered that temperature, humidity and barometric pressure can affect pendulum clocks. Here, check this out: 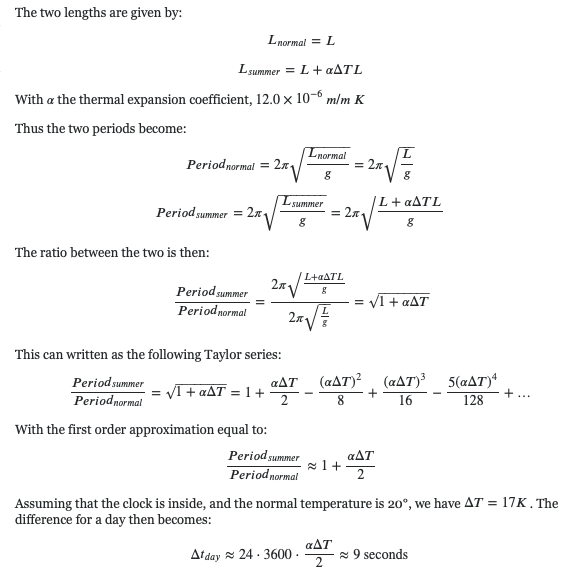 Clear? I thought so.

But I have another theory: Maybe the gnomes are having fun with my clocks, adjusting the pendulums behind my back when I’m not looking. It actually makes more sense.

Wait! Oh crap! It’s 2:29 p.m. and the grandmother clock downstairs chimed early! Shit! Now it’s 2:31 and the cuckoo clock and the mantle clock still haven’t made their presence known! All three were right on time this morning, and I haven’t done anything in the meantime to change it!