EDITOR’S NOTE: Welcome to the A to Z Challenge, an exercise in self-flagellation we bloggers inflict upon ourselves to teach us discipline as writers and to build audience. During the month of April, I’ll be posting 26 times, once for every letter in the alphabet. Looking on the bright side, we can each be thankful this is an English language exercise and not Khmer, the language of Cambodia, which sets the world record with a 74-character alphabet! After some misgivings, I’ve decided to proceed with my initial idea of blogging about the special people in my life whose names begin with the appropriate letter. There will be difficulties, like having more than one special person whose names begin with the same letter, forcing me to choose. And then there are those letters — O, Q and X among them — where no name springs readily to mind. What will I do then? We’ll have to wait and see! 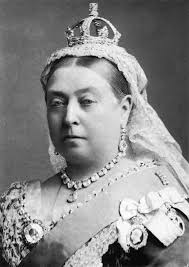 Q is for Queen

A temperamental queen lives inside my cupboard. She doesn’t like the cold, and only comes out when the weather’s fair.

On warm summer evenings I’ll get reacquainted with my frosty queen, for she is Queen Victoria, and her visage adorns my bottle of Bombay Dry Gin. I’ll pour a measure of that juniper-scented liquor over ice, add a wedge of lime and top it with that other Q word, quinine water. After a quick stir, I’ll sit on my deck and think about my English ancestors, who crossed the sea in wooden ships.

According to a genealogical record compiled by my uncle, my forebears arrived in America in 1697. Details are sketchy, and some of the dates don’t make a lot of sense, but it appears that back in England, a law was passed to restore property to people who had fled religious persecution, and because of that, my earliest known ancestors, James and Catherine, left their children in the care of “loyal servants” while they went back across the Atlantic to claim property in Dorchester.

Well, as fate would have it, my relatives were apparently lost at sea, though nobody knows that for sure. I guess it’s possible they reached England safely, reacquired their land, and decided to leave the kids in America, which seems reasonable. As a parent, I know I’ve had days like that.

But whatever happened, James and Catherine were never heard from again, at least not in America, where their loyal servants’ loyalty had a limit, because they soon gave the children up, making them wards of the state.

What that means is that my earliest ancestors were on the public dole right off the bat, which makes me wonder at the logic of latter-day relatives who ended up as heartless Republicans. But that’s just one of many things to consider as I lean back in my chair on a warm summer evening, the ice cubes gently clinking as I raise the glass to my lips.

Would I have left my children in the servants’ charge while tempting fate by crossing the ocean a second time aboard a wooden ship? And if James and Catherine never reached England again, might I still have rights to their unclaimed property?

No, probably not, I tell myself, in answer to both questions.

Perhaps I lack their spirit of adventure, or at least have a better notion of where my true responsibilities lie. At any rate, their decision is well out of my hands, something I can’t say about this bottle bearing Queen Victoria’s image, which is still within easy reach.

I think I’ll pour myself another, and raise my glass in toast to James and Catherine, who perhaps stood at the taffrail and raised their own glasses in a farewell toast to small children on a dwindling shore.